Your Ultimate Guide To Big Game Fishing In Mauritius

Fish You Can Catch During Deep Sea Fishing in Mauritius

Do you know which fish you want to catch during your deep sea fishing trip in Mauritius? If not, you can know about the different types of sport fish available in Mauritius. We will also guide you to the best fishing spots. 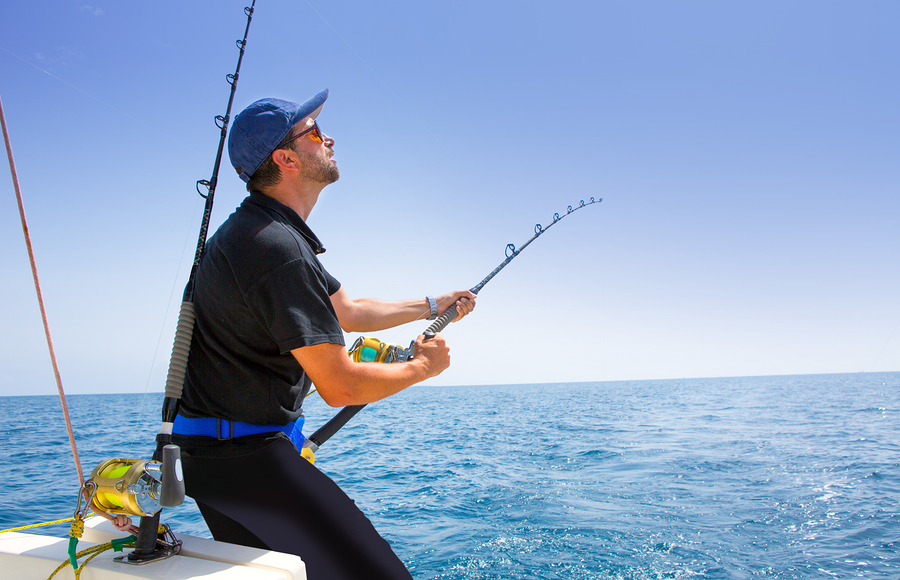 Welcome to Mauritius, one of the world’s big game fishing destinations thanks to its sea bed topography. As an amateur or as a licensed fisherman, you are guaranteed to enjoy yourself in sports fishing. As you draw away from the unspoiled coastline, you will know that you truly are in a fishing paradise.

Big game fishing is done exclusively on a private basis. This ensures you fully benefit and maximize on the trip from the guidance of our well trained and experienced staff regardless of your fishing expertise level or preference. The popular fishing departure points for deep sea fishing safari are Grand Bay from the North, Black River from the South West coast among other spots like Le Morne and Tamarin.

A full day big game fishing or deep sea fishing takes about 8 hours and a half day takes around 5 to 6 hours. Night fishing mostly starts from 6 pm. In case you plan to do a lot of deep sea fishing, consider a deep sea package. The package should include basics such as rods, fishing license, tackle, lures, reels, live bait, permit and first mate.

Whether it’s your first time or you are a frequent visitor, you can count on having a moment of pure pleasure. Some of the big game fishes you will find are the skipjack tunas, mackerels, fine yellow tuna, Dorado’s, the blue and black marlins, sharks and other fish species. The best time for fishing is during our summer period, between October to April. However, various fish species can be caught at different times of the year.

The fishing calendar is as follows

• Yellow fin tuna: March to May

However, it is important to note that during the months of May to end of August, we usually don’t go fishing due to the severe weather conditions. However, arrangements can be made during this period of the year but cancellation is also very probable depending on weather conditions.

Visit this idyllic setting today and experience the thrill of big game fishing in Mauritius.

To get the best Mauritius fishing charters, it is always advisable to do some research before the real fishing, as this can be the difference between an unforgettable day on the water or a frustrating letdown. The first step when deciding on a charter to choose is deciding on the kind of fish you want to go after as different charters specialize in various fish species. Liaise with our well trained staff to reserve a charter and get all the needed details for a memorable deep sea fishing experience.

Other factors to consider before chartering for deep sea fishing include;

Most fishing boats in Mauritius are equipped with GPS and fish finders among other luxuries like air conditioner or lounges. For family travelers, it’s vital to check the boat capacity and the number of fighting chairs available, usually two or three.

Children On Board Fishing Vessel

If you are considering taking the kids with you on the trip, it’s important to find out if they are permitted on board and the allowed age limit.

Who gets the fish?

After fishing, you can enjoy a delicious meal from your prized catch. While at it, it is good to confirm whether you are allowed to bring ‘your’ fish to your holiday accommodation. 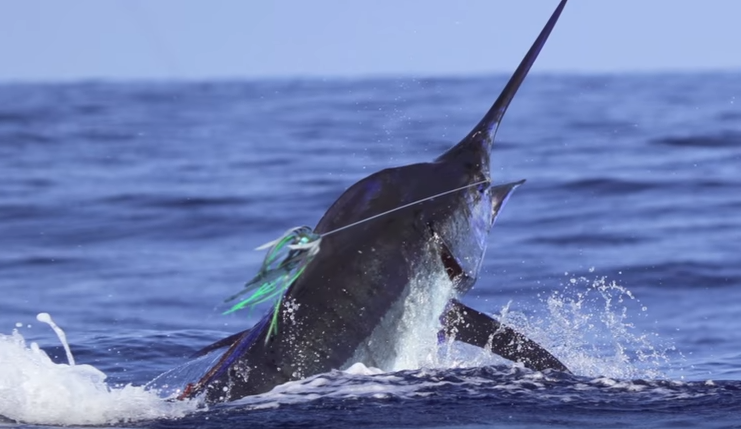 Often mistaken for the Atlantic blue marlin, this blue emperor has got clear vertical bands of cobalt blue colour formed by an array of spots or small strips.

Distributed across the Indian Ocean and the Pacific Ocean, the blue marlin is a surface species which can be found throughout the The Indian Ocean and seems to love swimming in waters of 25 °to 26 ° C. They often immerse to the depths of the ocean for food like squid and juvenile pelagic fish, particularly tuna. This species is exploited mainly by Asian longliners but also highly sought by sport-fishing fans.

Method of Capture of Marlin

You can choose your method of capture among longlines but sometimes drags, harpoon or gill net. The Mauritian record for blue marlin capture is 1355 lbs.

The best season for blue marlin fishing in Mauritius is from December to March while September to November can be considered. As an average season. However, for black marlin May to November can be considered as the average fishing season. The availability of stripe marlin is poor in Mauritian waters. So, plan your fishing trip according to the marlin you want to have a grip on!

To get the best marlin fishing package in Mauritius, it is essential to look for more than the cost of the fishing trip. Our crew members are the most experienced one and will guide you to the spots where you can find the different types of marlin. It is also important that you be prepared mentally for a good fishing trip if you want your campaign to be a successful one. 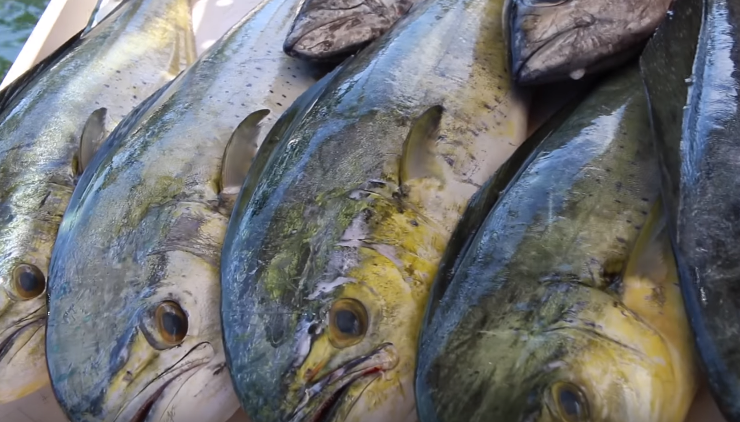 Dorado is also known as Mahi Mahi or Dolphin fish. Growing to a standard size of 100 cm and reaching up to a maximum of 200 cm, they have a very elongated and compressed body and are very strong (from where comes their Hawaiian name: “Mahi-mahi”). Moreover, they are among the fastest growing and reproducing species. They Feed mainly on fish, crustaceans and cephalopods. In adults, it’s straightforward to distinguish females from males by the shape of the head. Females develop a bone ridge on the top. The very long dorsal fin extends from the top of the head to the tail. The live fish has a turquoise blue back and dorsal fin and silvery belly which turns golden yellow in case of stress. After death, the blue turns to black, and the golden yellow turns silvery again. The dolphin fish is also known as the “chameleon fish: due to its very uneven colouring.

How to fish the Mahi Mahi?

The Dorado is pelagic species found all over the open ocean or at some distance from the coast and is prevalent species for consumption. It swims near natural or artificial floating objects. You can catch them by trolling in the vicinity of drifting wrecks or with fish aggregating device and by-catch of tuna fishing. The record weight for dorado in Mauritius is 68 lbs.

The best season to fish dorado in Mauritius is from April to September. The rest of the months are average in the rate. Having said that, there is not a miserable season for fishing dorado, and thus it is a fish that is available throughout the year.

Since this fish is available throughout the year, we encourage you to book with us during the low fishing season which ranges from May to October- because you can pay less during this period. However, don’t worry, we book with the top-notch crews so that you have a guaranteed experience of a lifetime. Before you book our deep sea fishing charters, we let you know that we have a variety of packages which embark from different marinas around the island. So, don’t worry if you are in the north of Mauritius like Grand Baie or the west like Black River. We are here to guide you to the right spots involving less travel journey by boat.

Sailfish also are known as Bayonet fish are commonly found to reach up to a size of 200 cm with a very elongated and compressed body. It has an upper jaw which is extended by a round and tapered rostrum. The dorsal fin developed as a real wing distinguishes it from the marlins. The pelvic fin is extremely elongated, and it reaches to the level of the anus. The orange band on the sides has a variable intensity depending on individuals.

How to catch a Sailfish?

The Sailfish is a species which generally lives above the thermocline and surface across the whole ocean and tends to stay around the coast of continents and Islands. It feeds mainly of small pelagic and squid. Unlike Tunas, Sailfishes do not stay within large schools but instead live in small groups of a dozen individuals. To capture them, you can use drags especially and longline, but sometimes also to the Harpoon or the net.

The best time to catch sailfish in Mauritius is from December to February though you can get the fish also in March, October and November. The rest of the months is poor in sailfish and many a time you are likely to return without a catch! So, its not worth investing money during this period of the year if you want to catch this tuna fish.

Sailfish fishing is also a deep-sea sports fishery in Mauritius. Our crew members are very experienced, and they have the necessary equipment to make you the fishing trip a successful one. We offer sailfish fishing package especially during the peak fishing season for this fish.

Bonito or Skipjack Fishing in Mauritius 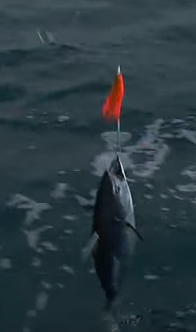 Skipjack tuna also known as the Bonito is a member of the family Scombridae and it can be found to grow up to 100 cm. It has a uniform and elongated body with small teeth and two strong longitudinal ridged cartilage on the tongue. The beauty of this fish comes through its shiny body with no scales except the thorax. You can also notice the presence of a strong keel on the caudal peduncle and, at its end, two small keels.

How to include bonito fish in your big catch?

The Bonito is a pelagic schooling species which swims in big schools in offshore waters in all the oceans in subtropical and tropical regions and most of the time can be found above the thermocline and warm waters. We can most of the time find them near floating objects. The Bonito feeds on small fish which can even be the younger ones of their species and crustaceans. Just grab a cane and live to bait it and you can also use a sabiki rig. Make sure to hold your catch sideways to calm the fish and quickly remove the hook.

Bonito or skipjack tuna is available for deep sea fishing throughout the year, but the best catch is recorded during the months of March, April & from July to October. This fish is generally not the target species, but it can save your day of fishing and hard work if you are not able to get hands on your target species.

We do not offer a specific package for the capture of bonito. You are thus allowed to catch this fish during all the other fishing trips that you undertake with us. Since this fish is available throughout the year, it saves your fishing trip many a time!